Kicking off on Sunday, July 7th with the SiriusXM Futures Game and capping off with the 2019 MLB All-Star Game on Tuesday, July 9, the annual mid-summer classic has come and gone for the MLB. Seeing tons of excitement on the field throughout the week, we saw a highly talented field for the Futures Game, Pete Alonso win the T-Mobile Home Run Derby and the American League outlasting the National League 4-3 in the All-Star Game.

Over the entire All-Star Week, we saw some pretty eye-popping numbers. Over the span of 7/7-7/10, we saw a total of 272.2K people engaged on social, with 3.3 million total engagements amongst them. This equated to a total engagement value of over $3.1 million on social for the 4 days.

With records being broken all night from single round records to total derby records, the 2019 Home Run Derby was surely the talk on Twitter Monday evening. We saw a total engagement number of over 160,000 people discussing the All-Star events. Among the big winners on social during the event was none other than the title sponsor of the event, T-Mobile. Over the first three days of All-Star week, including the night of the derby, T-Mobile had generated over $2.1M in value on social.

Although not the winner, it goes without saying that the star of the show was Toronto Blue Jays rookie sensation, Vladimir Guerrero Jr. During the timeframe of the event, our platform showed twice as much conversation around Guerrero Jr. than derby champion Pete Alonso… and Guerrero Jr. doesn’t even have a Twitter account. Most of this conversation was consumed by Guerrero Jr.’s semifinal match up vs Los Angeles Dodgers’ Joc Pederson. The two sluggers set a record for a combined 79 homers in their match-up, and the clip you see below from SportsCenter’s Twitter account generated $217K in total engagement and impression value. It goes without saying, this year’s derby was a HIT! 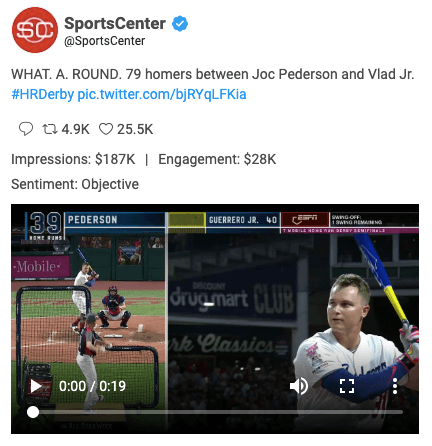 Using our platform, we broke the data down to focus solely on the night of the All-Star Game from 7:00pm on 7/9 to 12:00am on 7/10. During this time, we saw 1 million total activity on social, with 1.5 billion total impressions. This impression value totaled to $8 million in the five hours tracked.
The top piece of content came from the MLB’s official Twitter page in the form of a video of Braves’ first basemen Freddie Freeman mic’d up during his first at-bat during the game. This tweet had a total engagement and impression value of $66.1K. 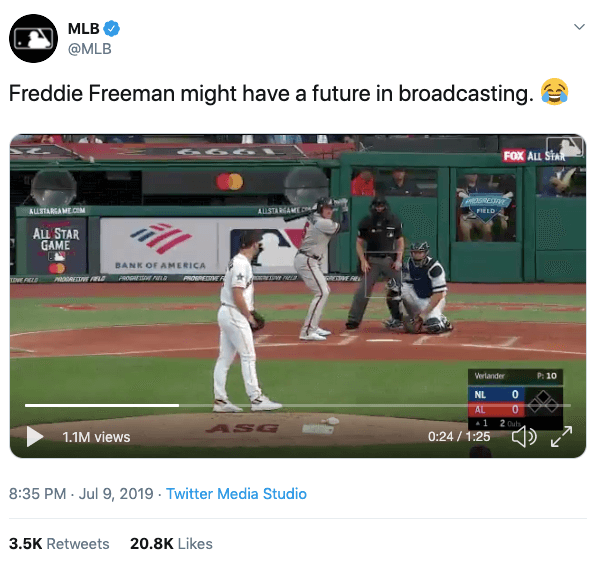 Throughout the week, we evaluated total values on sponsorship involved in the event. At the top of the list was Mastercard, the presenting sponsor of the All-Star Game, who had a combined impression and engagement value of $715,844. Next was Progressive, who holds naming rights to the stadium of the host of the game, the Cleveland Indians. To round out the top 4, we saw Chevrolet and Fanatics, who had combined engagement and impression values of $374,875 and $223,158 respectively. Chevrolet was involved in the game by providing a new Silverado to All-Star Game MVP Shane Bieber.