NBA Twitter All Stars – Top 15 Players Of All Star Weekend

Last Weekend, the NBA was on full display during the 2019 All Star Game. And with the continued rise in popularity with players combined with the growth of #NBATwitter, the social chatter around the games and competitions was a site to see for those in and out of Charlotte.

Here were the top 15 players from the NBA All Star Game, sorted by total activity around them on Twitter (posts, engagements, and interactions). This was gauged by tracking direct mentions of and tweets posted from them from 2/15 – 2/18. The names listed below are their Twitter accounts.

Want to see more info? Scroll down to see details for each, such as the agency that reps them, the sneakers they wear, and the impression value they earned with content surrounding them. 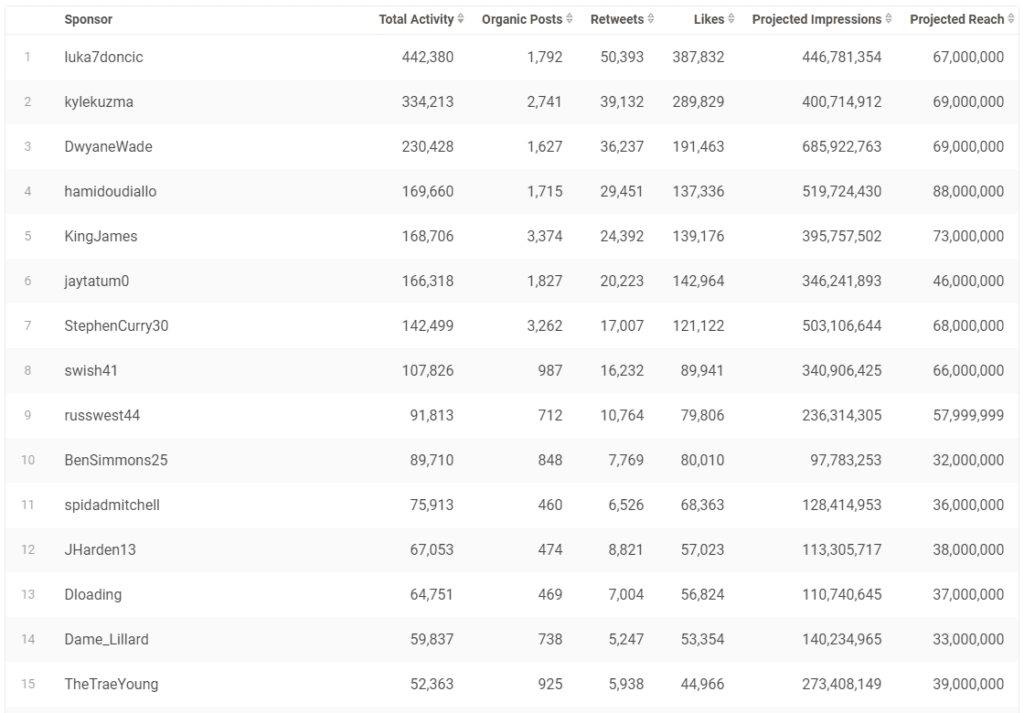 Young was an active man during NBA All Star weekend. Featured in the Rising Stars game as well as the Skills Challenge, Young was active on his Twitter over the weekend, partook in activities with Yahoo Sports and TNT, and had the Atlanta Hawks supporting him.

Lillard documented his journey through NBA All Star Weekend in-depth over social media and kept himself busy, from meeting J. Cole to coaching the Special Olympics game. On top of that, he showcased a special edition of his sneaker line with Adidas in honor of the Daytona 500.

As the Brooklyn Nets’ only All-Star, Russell was the center of attention for the team handles on Sunday. The Nets used Twitter to provide a unique, exclusive view into the gameday prep for the guard. On top of that, Russell got some shout-outs from his alma mater and from across the pond.

Despite only posting once on Twitter over the weekend, what Harden shared on his Instagram over the weekend went viral & was picked up over a number of different handles, including Bleacher Report, NBA TV, and Complex. He also got lots of love from the Rockets, as he was the only player from Houston participating in activities over the weekend.

A participant in the Rising Stars game, Mitchell had his own viral moment during the weekend but was a good sport about it. Making appearances with NBA Cares as well as Dwyane Wade’s farewell event, he kept active on social, engaging with fans and celebrities as well as featuring New Era and Lids in content.

As a participant in the All Star Game as well as the Rising Stars game, it was a busy weekend on social for Simmons. From lots of love from the Sixers to featured sponsor plugs for brands like Beats By Dre and Nike, Simmons is sure to be a highlight in many All Star weekends to come.

I can play in this game next year right? ⭐️🤣👀 #nbarisingstars pic.twitter.com/GCpnymgWzf

Westbrook’s personal Twitter over the weekend was very endorsement-focused, with his sponsors taking advantage of the additional exposure this weekend. With that said, his personality shone brightly off the court and was shared over his personal IG, the Thunder, and Overtime.

Russ & PG were hyped after Diallo won the #ATTSlamDunk 😂

With this potentially being his last season, he and Dwyane Wade were both ceremoniously invited to play in the All Star Game. The two of them were part of a lot of content from ESPN and TNT. He and young star Luka Doncic were also featured quite a bit together (more on him to come).

The face of Under Armour basketball and as one of the biggest superstars in the NBA, Curry was featured heavily both during the All Star Game as well as the 3-Point Contest. Despite not posting much himself over the weekend, he has close ties with Charlotte (the host city), went up against his brother, gave back to his alma mater, and brought plenty of highlights on the court.

.@StephenCurry30 brought back the jacket! pic.twitter.com/f56JAhtubF

The Skills Challenge champion was active on Twitter during the weekend, interacting with fellow players and posting about his son while at practices. He also got plenty of love from the Celtics, TNT, and ESPN.

While not posting about the game itself from his Twitter, LeBron was the most talked-about player over the course of the weekend. From his pregame press conferences to his game highlights, LeBron generated more organic conversation than any other player.

.@KingJames from half court! pic.twitter.com/vkzOURe1qu

The Slam Dunk champion won big this weekend on social media, reaching the largest audience amongst every All Star Weekend participant. This proved to be big social value for both the OKC Thunder as well as Under Armour.

Generating a greater impressions value than any other player this weekend, this was potentially Wade’s last All Star Game. Providing insightful interviews for a number of different sources, he also took to his own handle to tell his story and express gratitude for everything over the weekend.

One of the young superstars for the Lakers was the MVP of the Rising Stars game. With fellow teammates Lonzo Ball and Josh Hart talking about him over the weekend along with the Lakers, Kuzma took to social, posting about the weekend from both his own handle as well as the NBA’s.

With a 35-point performance, @kylekuzma is your Rising Stars Most Valuable Player. pic.twitter.com/fA7iKKP3rU

The front-runner for Rookie Of The Year had the #1 tweet from All Star Weekend and generated the most total social activity over the three days. Playing in the Skills Competition, hanging out with Dirk Nowitzki all weekend, and offering to be mic’d up for the Rising Stars game made for social media gold.