NASCAR and BMW Championship Sponsors Drive The Weekend on Social

This past weekend was packed full of sports, with premier events including the PGA TOUR’S BMW Championship and NASCAR race weekend at Bristol. We used the Zoomph platform to track both of these events and measure the social performance of each event.

I don’t even know where to start, thank you all so much for the support. I wanted to win so dang bad. The crowd reaction after the race absolutely broke me down and melted my heart. My entire team is so amazing and I’m lucky to have @MikeCWheeler as crew chief...he is THE BEST

The biggest headline of Saturday night’s race was not the win by Denny Hamlin, but rather the second-place finish by Matt DiBenedetto. DiBenedetto currently drives the number 95 car for Leavine Family Racing, but after Saturday night’s race, the conversation was all about how he had earned himself a spot with a bigger team. In fact, while race winner Hamlin was mentioned in 5% of the post in our feed, DiBenedetto more than doubled that by being mentioned in 12% of posts. The conversation regarding DiBenedetto was able to garner a social impression value of $87,637, which would rank above all other racers. 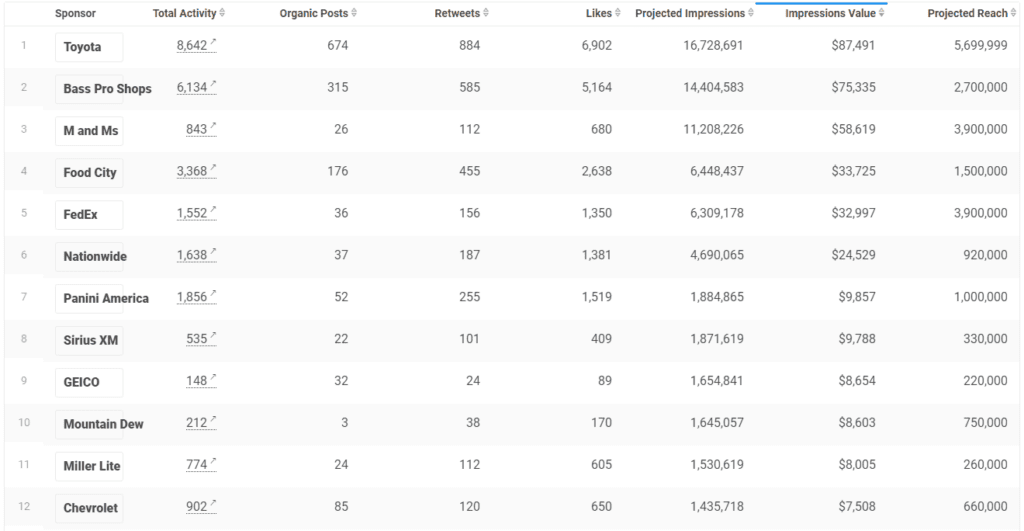 This weekend, Medinah Country Club played host to the BMW Championship, the second leg of the PGA TOUR’s FedEx Cup Playoffs. With the top 70 golfers in the FedEx Cup Standings fighting their way into the top 30 to earn a spot in next weekend’s Tour Championship, it was an eventful weekend of golf. Almost matching the NASCAR numbers, the Zoomph platform tracked 1 billion impressions of the event, carrying a total impression value of $5.5 million.

As expected when he is playing in an event (and sometimes when he’s not), the top mentioned player this weekend was Tiger Woods, who was mentioned in 21% of posts. Not far behind was event winner and new FedEx Cup standings leader Justin Thomas, who was mentioned in 18% of posts. Thomas’ social activity translated to a social impression value of $993,252, which is significant when considering potential sponsorship deals.