Winning Isn’t Everything: An Untraditional Approach to Traditional Viewership

The AFC Championship saw better TV ratings than any other broadcast since last year’s Super Bowl. Were fans just as engaged on digital? The Cowboys and Eagles each won their first-round matchup.

Did that help bring Twitter numbers up for the NFC Divisional Round?

The NFL Playoffs brings out some of the best work in social media from teams and fans alike. From the casual celebrity fan to the intense ones in the stadium, everyone comes out and supports their team in hopes they make the big game. We at Zoomph investigated what teams and games were talked about the most on Twitter during the playoffs and provide a ranking system of both the teams and games.

Most Talked About Teams

During the three weeks of the NFL Playoffs before the Big Game, we tracked all posts from each of the 12 playoff teams, the mentions of each team, the usage of each team’s hashflags, and other terms such as #NFLPlayoffs. This was used to see who was talked about and which teams reached the greatest audience.

Here are the top teams from the NFL Playoffs on Twitter sorted by total activity.

Some insights from these results:

In order to create a metric nearly equivalent to TV ratings, we created our own system of digital “ratings.” From one hour before kickoff to one hour after the final whistle, we gauged the organic social conversation around each game during the NFL playoffs. This was done to track the live conversation about each game in the moment, encouraging people following along to tune in live.

Here are the top games sorted in order by number of organic posts on Twitter. 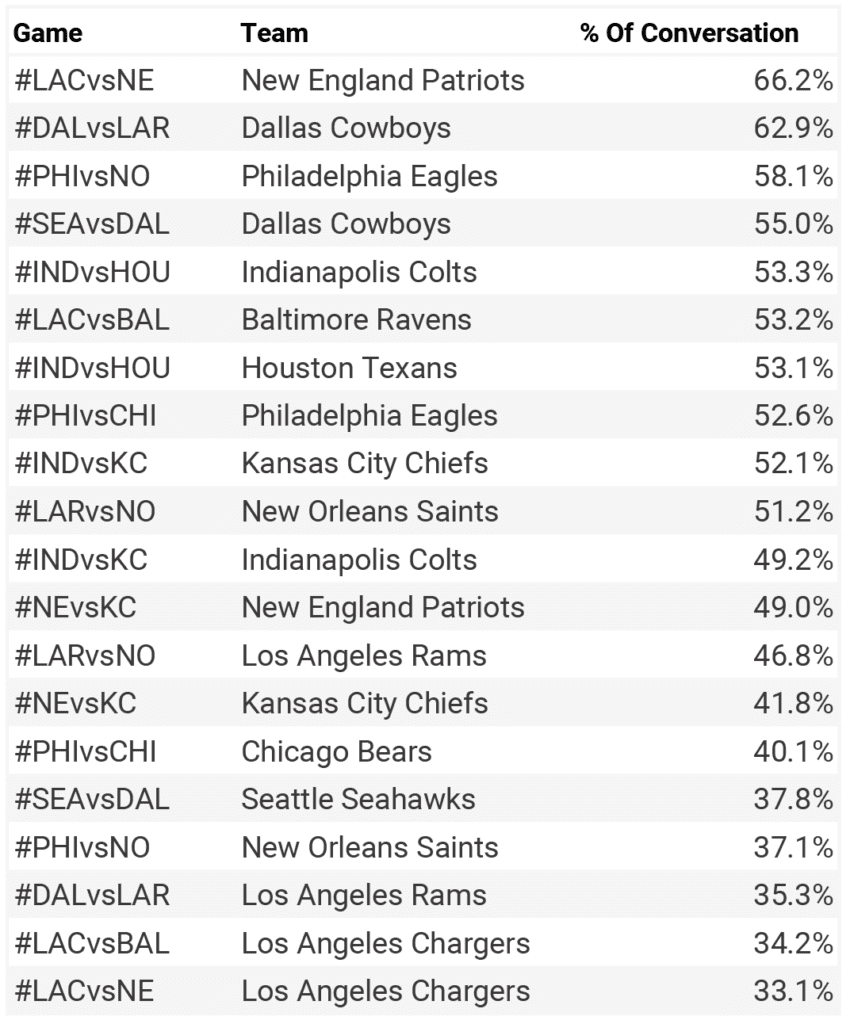 A couple of interesting insights from these games:

During games, some teams and their fans contribute more to the conversation than others. Even the losing team can be the subject of more conversation.

Some insights from these results: