My Cause My Cleats Social Media Value Highlights the Initiative & Impact

The NFL’s My Cause My Cleats takes place every season and gives players the opportunity to use their public platform and social media to show support for causes they care about.

This event expertly leveraged the massive attention the league already garners to raise awareness for incredible organizations. Using Zoomph, we aimed to put numbers behind that impact. We assessed tweets in Week 13 that included the hashtag #MyCauseMyCleats and discovered which players and teams generated the greatest value for causes over the week.

When it comes to teams generating awareness and social value for the causes their players choose, the Denver Broncos topped the list, with Tweets generating over $1.1M in social value. This was followed by the San Francisco 49ers and the Dallas Cowboys which generated 1M and 657.7K in social value respectively. See the complete ranking of the teams that generated the greatest social value during the NFL’s 2019 My Cause My Cleats campaign below, or download the full report here. 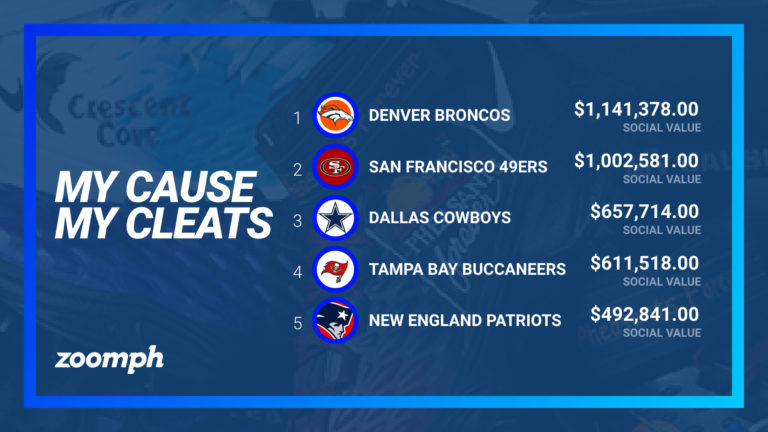 The weekend consisted of a number of great causes earning major attention from the NFL’s campaign. The V Foundation earned the most exposure, with a social value of over $306.7K. This was followed by the Alzheimer’s Association and Russel Wilson’s Why Not You? foundation, which earned $276.9K and $177.6K respectively.  See the complete ranking of the foundations that earned the highest social value during the NFL’s 2019 My Cause My Cleats campaign below, or download the full report here. 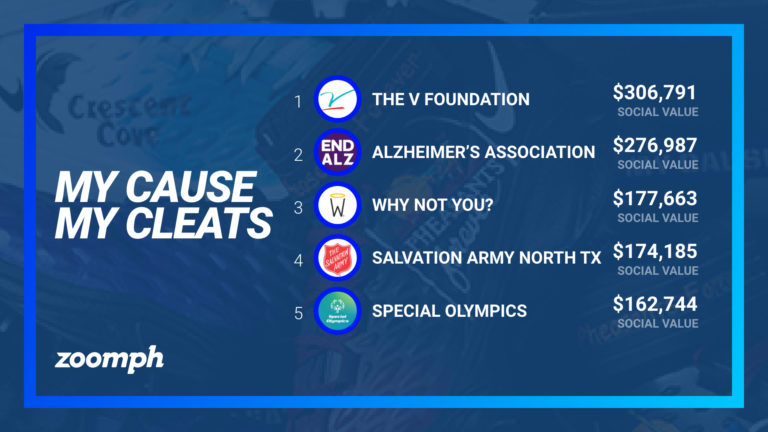 Overall, the campaign was a huge success for everyone involved, and speaks to the opportunity for similar style campaigns in other leagues and even individual teams.
Encouraging players to choose causes that they feel strongly about and helping give them a platform to bring exposure to the organizations can make a huge impact.