Let’s talk mascots. A staple of the game day experience, a quintessential photo op, and sometimes things that might incite nightmares (looking at you Gritty). But what do mascots do when they can no longer be part of the game day experience? They take to Twitter. 24 teams went into the NHL Bubble, 12 in Edmonton and 12 in Toronto. 17 of those teams have active mascot Twitter accounts and our team at Zoomph went and took a look at the social analytics numbers through the first week of the Stanley Cup Qualifiers and Round Robin.

When the Philadelphia Flyers launched Gritty, he took the social media world by storm and set a new standard for team mascot accounts to aspire to. From August 1st – August 10th, Gritty led the way with over 2 million impressions and nearly $50,000 in added social value. It helps when your team is playing extremely well, but with Gnash from the Nashville Predators in second place, we see that even when your team gets knocked out, you can still provide value to the tune of nearly $20,000 in a week. 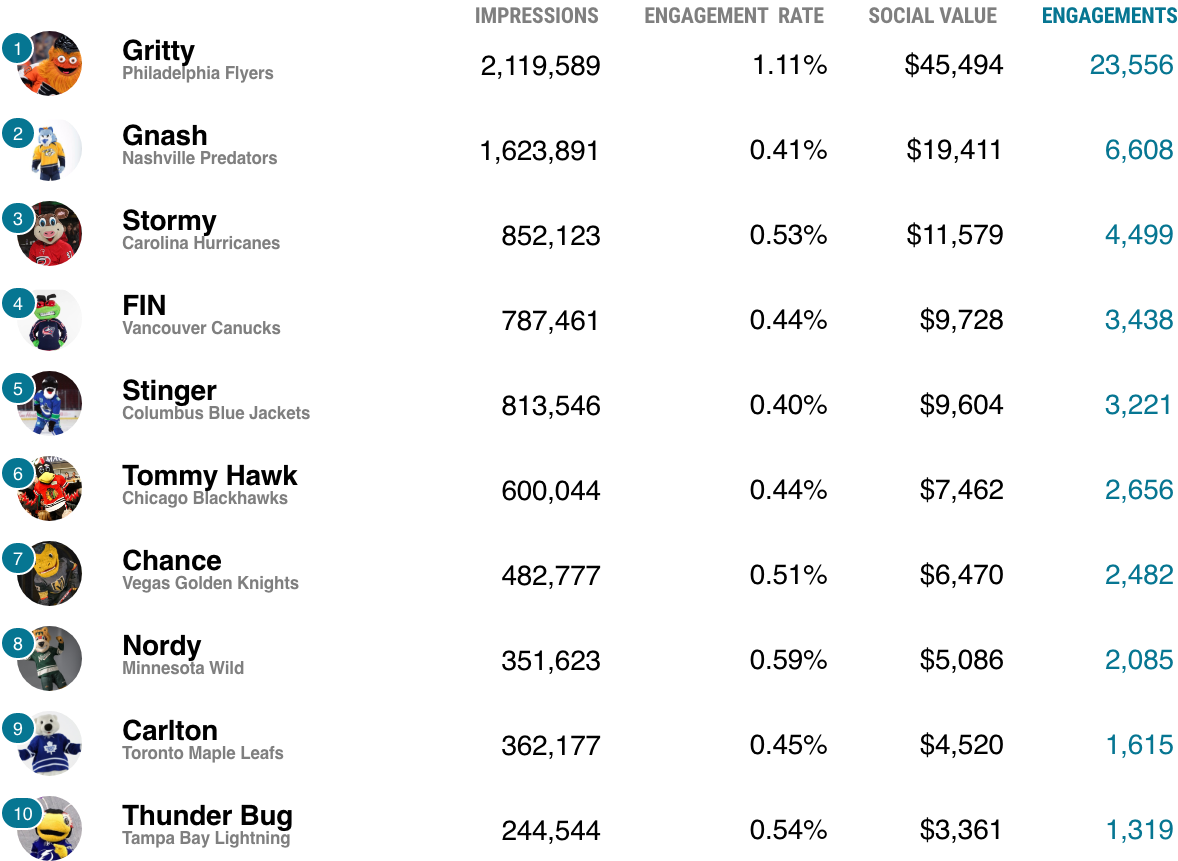 Teams in professional sports no longer just have one social account, it’s a well-rounded complement of accounts that include additional language accounts, dance/cheer teams, and mascots. Mascots can help you reach a different demographic than your traditional team account – often we see mascots associated with community relations initiatives and kid’s clubs.

Generation: Team mascot followers are 1.4x more likely to be part of Gen-X

Brand Affinities: Some of the top brands that the mascot followers have affinity for were: Lego, Southwest Airlines, NutriBullet, and Etsy

In addition to reaching a different demographic and providing value for team awareness, they can also provide an added benefit to sponsors. While the teams are in the bubble, they can be on location for their local sponsors to provide support and value. The Nashville Predators even used Gnash to put a nice spin on getting eliminated by the Arizona Coyotes with their partner Omni Nashville Hotel. During the week, Gnash also found ways to integrate sponsors like Walmart, Tennessee Lottery, and Twice Daily into his tweets.

The St. Louis Blues have partnered with Bud Light to have a caravan that drives through different neighborhoods as part of their Blues Game Day Pep Rally. Louie helped spread the word by posting the route they’d be taking and making sure he tagged Bud Light! During the first round, Louie and the team posted about three of the caravans, adding an additional $1,000 of exposure to Bud Light.

We’ve loved seeing all the creativity displayed by the NHL and their teams, and we can’t wait to see more and the Stanley Cup Playoffs continue.

The NFL is back! This year, the work of digital teams is more important than EVER. And they sure flex 💪. Here were the top teams on social media by engagement rate during Week 1!… Read More

Contributing Collaborators: Cydney Dodson (WiST Fellow) and Mier Shao (WiST Fellow)   The sports sponsorship landscape has drastically changed now more than ever for everyone. With limited to no fans in the stadiums and arenas,… Read More

Seattle is officially a hockey town. Fans waited years to finally know the team's name that would be occupying Amazon’s Climate Pledge Arena. On July 23rd, the team name was revealed to be the Seattle… Read More

Top 10 NFL Teams on Social During the Offseason

As the NFL gears up for another season, there is a lot to reflect on during this past offseason. An offseason like no other, we saw many storylines that would seem unthinkable; Tom Brady signing… Read More

Any cookies that may not be particularly necessary for the website to function and is used specifically to collect user personal data via analytics, ads, other embedded contents are termed as non-necessary cookies. It is mandatory to procure user consent prior to running these cookies on your website.