The Premier Lacrosse League (PLL) just gifted the growing lacrosse community with two weeks packed with live sports. A league that since it’s inception last year has been ahead of the curve, they were able to design and execute a COVID-19 proof, tournament style, professional lacrosse, “Championship Series.” All seven of the league’s teams, including the new expansion team owned by Barstool Sports, The Waterdogs (#EveryGameIsARevengeGame), gathered in Herriman, Utah at Zions Bank Stadium to compete for this years’ Championship Trophy. The two-week event was broadcast on NBCSN, and six of the games were exclusively broadcast on NBCGold. The real return on value was on social media, as the PLL was the gift that kept on giving for their followers. Unique behind the scenes content mixed in with mic’d up players and interviews created content that was shared across the platform, bringing in followers and viewers who had never partaken in the sport of lacrosse before.

According to Zoomph’s audience analytics, we analyzed the conversation around the tournament on Twitter and found that 65% of users talking about the event are fans of mainstream U.S. sports adding to the knowledge that this tournament was instrumental in opening up the sport of lacrosse to a wider audience which is beneficial for the league, the players, and their sponsors. People in the conversation were also 11.7x more likely to be interested in sports betting & gambling, a number that partner DraftKings would be excited about as DraftKings and PLL partnered to encourage fans to make bets during the 2020 tournament.

Premier Lacrosse partners like Vineyard Vines, Gatorade, and Utz Snacks were heavily featured and the teams and league also made sure to tag and share content from players. Player generated content has proven to be a valuable commodity in social as teams handle connecting with fans while they aren’t able to be in the stands. In fact, one of the top posts throughout the tournament had nothing to do with the game. It had everything to do with the players and their families. 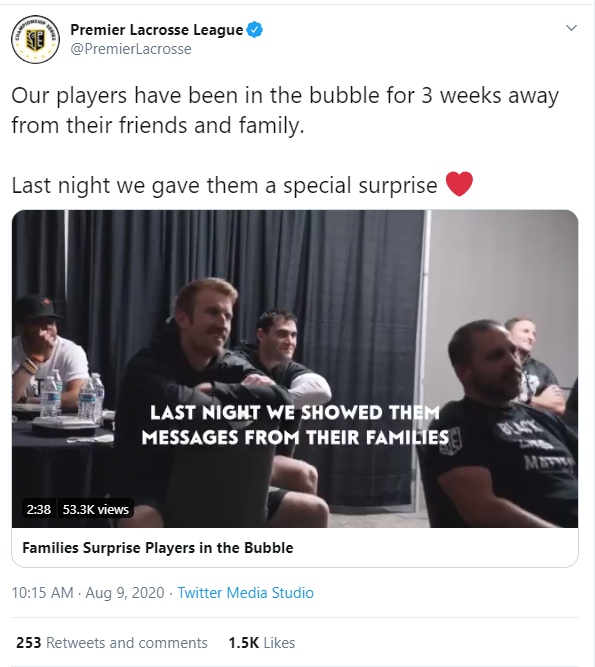 Using the Zoomph platform we created earned and owned media feeds for all seven teams in order to further analyze who managed their Twitter platform the most efficiently. The PLL heavily uses Twitter; teams, players, league personalities, and more use this social platform to live tweet and review game action.  The Championship game was played by the Whipsnakes (the reigning champs), and the come back kids, the Chaos who went 0-4 in group play and fought their way into the final game.

The finalists however, conquered the projected reach, impressions value, and max potential impressions, leading the league handsomely in all three areas. Considering the current sports climate and the youth of the league, it is logical that the two finalists would lead in the categories they did. However, it is important to note that other teams had a large impact off the field and on the screens. Although neither team advanced to the finals, the Redwoods and Waterdogs were the champions of Twitter in the PLL’s second season.

Congratulations to the Premier Lacrosse League on navigating only your second year as a league and executing a successful tournament during a pandemic!