The Success of City Connect: MLB and Nike Hit a Home Run on Social Media

For the second year Nike partnered with MLB to unveil seven new City Connect uniforms. Per MLB, these special jerseys are meant to “celebrate the bond between each Club and its city.”

Nike started its 10-year deal with MLB as the officially uniform outfitter in 2020, and were quick to roll out the City Connect program the next year. The special alternate jerseys were first introduced in 2021 with seven teams – the Boston Red Sox, Miami Marlins, Chicago White Sox, Chicago Cubs, Arizona Diamondbacks, San Francisco Giants and Los Angeles Dodgers. As with anything new or different, there were mixed reactions to the different designs.

We analyzed the social performance of these launches to find out which City Connect reveals generated the most buzz. 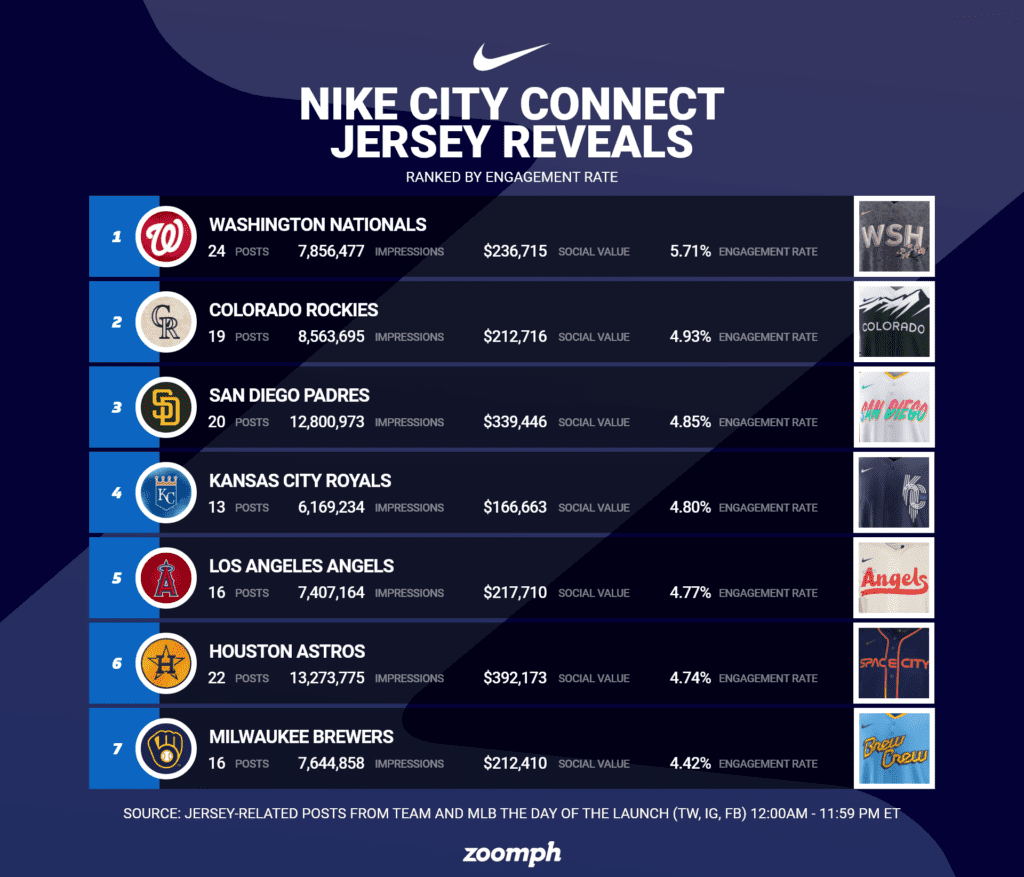 In total, the seven City Connect launches generated over 63 million impressions, 3.1 million engagements and $1.7 million in social value across team accounts and MLB. For Nike, this kind of buzz not only converts to jersey and merchandise sales, but also provides tons of added digital brand exposure.

Having a City Connect jersey is always a good source for extra content and excitement, but some jersey launches hit it out of the park, performing particularly well on social.

The Nationals were the first team to launch their Nike City Connect uniforms, releasing their cherry blossom themed jerseys before the season started. After a long lockout and the triumphant return of Major League Baseball, their March launch had the highest engagement rate at 5.71%, indicating excitement for the upcoming season and an overall positive reaction to the design.

The Nats had the most aggressive strategy, posting about the jersey 21 times on their own accounts. Additionally, MLB’s posts about Nats jerseys earned a 7.12% engagement rate, the highest MLB’s posts had for any of the reveals. By launching during Spring Training, their City Connect uniforms were the main talking point of baseball Twitter that day. Additionally, their launch was in tandem with the NBA’s Washington Wizards, who also unveiled pink cherry blossom jerseys.

The Astros capitalized on their large social following, the biggest of the seven teams, to help boost their City Connect reveal social numbers. Just counting social posts from their own account, the Astros Space City launch earned the most engagements and social value and had the highest engagement rate across Twitter, Instagram and Facebook.

With this jersey, we remind the world...

This is Mission Control.
This is Houston.
This is #SpaceCity. pic.twitter.com/J8ijYCWJJj

Combined with MLB’s posts about the Space City Nike uniforms that day, they had the most overall impressions as well, but their engagement rate dropped drastically to second-to-last of all the 2022 launches.

The Padres were the last team to reveal their City Connect uniforms, unveiling the neon numbers on July 1st. Despite having a smaller following than Houston, cross-platform posts about the jersey from their own accounts had the most impressions for any team, over 7.7 million.

The jerseys pay homage to their binational fan base and vibrant colors of the southern California coast. Their campaign leveraged the star-power of San Diego, prominently featuring Fernando Tatis Jr., Manny Machado and Blake Snell. With MLB’s posts, they ended up #2 for impressions, engagements and social value and #3 for engagement rate.

Like the Nats and Padres, the Rockies took their uniform design and color scheme in a whole new direction for City Connect, referencing the landscape and license plate of Colorado. Colorado has the smallest social following of the bunch, but combined with MLB’s social content their launch was well-received, generating the second-highest engagement rate and third-most impressions.

MLB’s posts about the evergreen Rockies uniforms had the most engagements of any 2022 City Connect launch shared via their social channels. The success of MLB’s posts indicates a positive reaction from general baseball fans, even if they’re not necessarily Rockies fans.

Which 2022 City Connect uniform was your favorite? What team do you want to see launch one next year?