PGA Tour vs LIV: Who is Winning on Social?

Photo by Robert Ruggiero on Unsplash

We will begin with an overview of the events as a whole. The PGA Tour dominated everything when it came to Facebook and Instagram. They posted much more and generated high social value, impressions, and engagement numbers. LIV on the other hand struggled mightily on Instagram and Facebook comparatively and thus did not put forth a ton of content on those platforms. 91% of LIV’s social media content for the event was on Twitter, while that number was only 68% for the PGA Tour. On Twitter, for the two events, the PGA Tour generated approximately four times the impressions, engagements, and social value that LIV generated. It is important to note again that the LIV tournament was only three days while the PGA Tour tournament was four, but the comparison is not close. Follower interaction is the only area where LIV outperformed the PGA Tour with a follower interaction rate of .602% compared to the PGA Tour’s .051%. Overall, the PGA Tour performed vastly better because of a much wider reach and a greater number of posts. 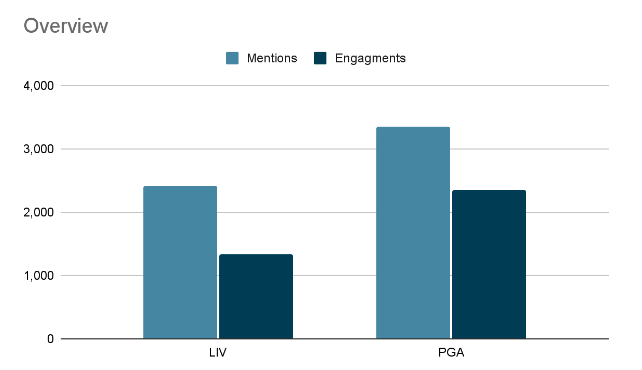 We will also quickly look day by day, to see the comparison from that standpoint. On Thursday, June 9th, the Twitter performance was quite interesting. The reach of LIV compared to the PGA Tour was 78,000 to 2,800,000, so not close at all. The PGA Tour posted more times on Twitter than LIV and generated 1.3 million more impressions, 10,000 more engagements, and a social value that was about $30,000 higher. LIV posted a small amount on Twitter and Instagram on day one, but the PGA Tour blew LIV out on all metrics regarding those two platforms.

On Friday the 10th, LIV had a few more posts on Twitter compared to PGA Tour, but the PGA Tour dominated yet again. With a reach triple the size of LIV, the PGA Tour had 2,000,000 more impressions, 20,000 more engagements, and $60,000 more in social value. The only metric that LIV performed higher on was follower interaction rate, where they were measured at .547% compared to the PGA Tour’s .041%. LIV produced no content on Instagram or Facebook, so the PGA Tour generated another 5.7 million impressions and $190,000 in Social Value. 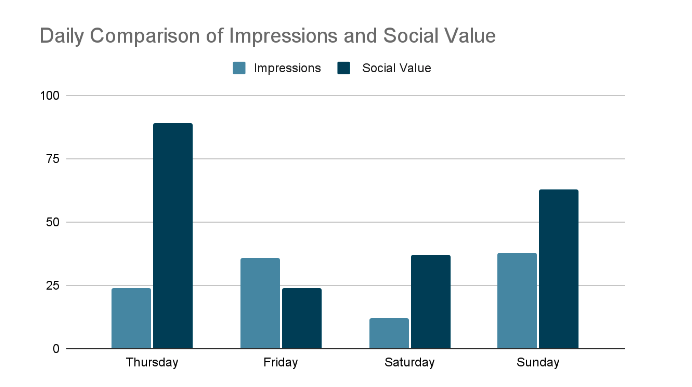 However, while the impressions were lower, the engagements and Social Value were substantially higher. This Twitter post from the PGA Tour generated 8,843 engagements and a Social Value of over $24,000 which just about doubled the top post for LIV at under $13,000. Overall, this comparison shows that the PGA Tour is overwhelmingly dominant on Facebook and Instagram, and it also shows that the PGA Tour is much better at monetizing and creating value with their posts compared to LIV.

In conclusion, the glaring takeaway from this comparison is the fact that the LIV Golf Tournament is just getting started. The engagement and follower interaction rates are encouraging for LIV but they must expand their reach and learn to maximize the social value of their posts. For now, the PGA Tour is overwhelmingly the clubhouse leader when it comes to maximizing reach and being able to generate larger social numbers for brand partners.