After 25 years, MotoGP is back in Indonesia. In March, the Grand Prix of Indonesia was hosted at Mandalika International Street Circuit on Lombok in the West Nusa Tenggara province of Indonesia. The archipelago nation last hosted a Grand Prix in 1996 and 1997, but the buzz of motorcycle engines never left, with tens of millions of motorcycles in use in Indonesia, where monthly sales averaged 421,000 units last year.

Drama permeated the run-up to MotoGP’s first Indonesian GP in a quarter-century, with the big news being Marc Marquez’s violent warm-up crash ruling him out of the race. The race was then shortened from 27 laps to 20 over safety fears about the condition of the circuit, worsened by extreme heat and heavy rain that led to a delay of an hour and 15 minutes.

As of February 2022, Indonesia had around 191.4 million active social media users, ranking third after China and India in the Asia Pacific. That impressive digital audience resulted in a lot of social conversation around the race. Tracking social content from MotoGP, teams and drivers about the Indonesian Grand Prix about and Twitter activity discussing the event before, during and after race weekend, it’s clear the return to Indonesia was popular for fans.

Repsol Honda Team driver Marc Marquez’s post with Mr. President before the race became the top piece of content with more than 12% engagement, totaling over 1 million engagements and 8 million impressions on Instagram.

A local story about Rara Istiani Wulandari, a pawang hujan, or rain shaman, whose job it was to delay or divert the rain — or make it rain if that’s the requirement — was highlighted in a MotoGP Instagram post. It was an inarguably unique turn of events worthy of discussion, and some Indonesians pointed out the “duality” of the incident — an indigenous tradition in a modern, global sporting event. This content earned more than 11M impressions and almost 1.2M engagements on Instagram.

A horrifying warm-up crash for Marc Marquez at the Indonesian Grand Prix caused the eight-time world champion to withdraw from the event with a concussion. The crash also lead the Spaniard rider to become the most mentioned driver during the race with more than 100 million impressions created for content related to him.

Current world champion, Fabio Quartararo, and the race winner, Miguel Oliveira, followed in the second and third positions for most mentioned drivers. More than $700k social value was calculated for the conversation around those two podium finishers. 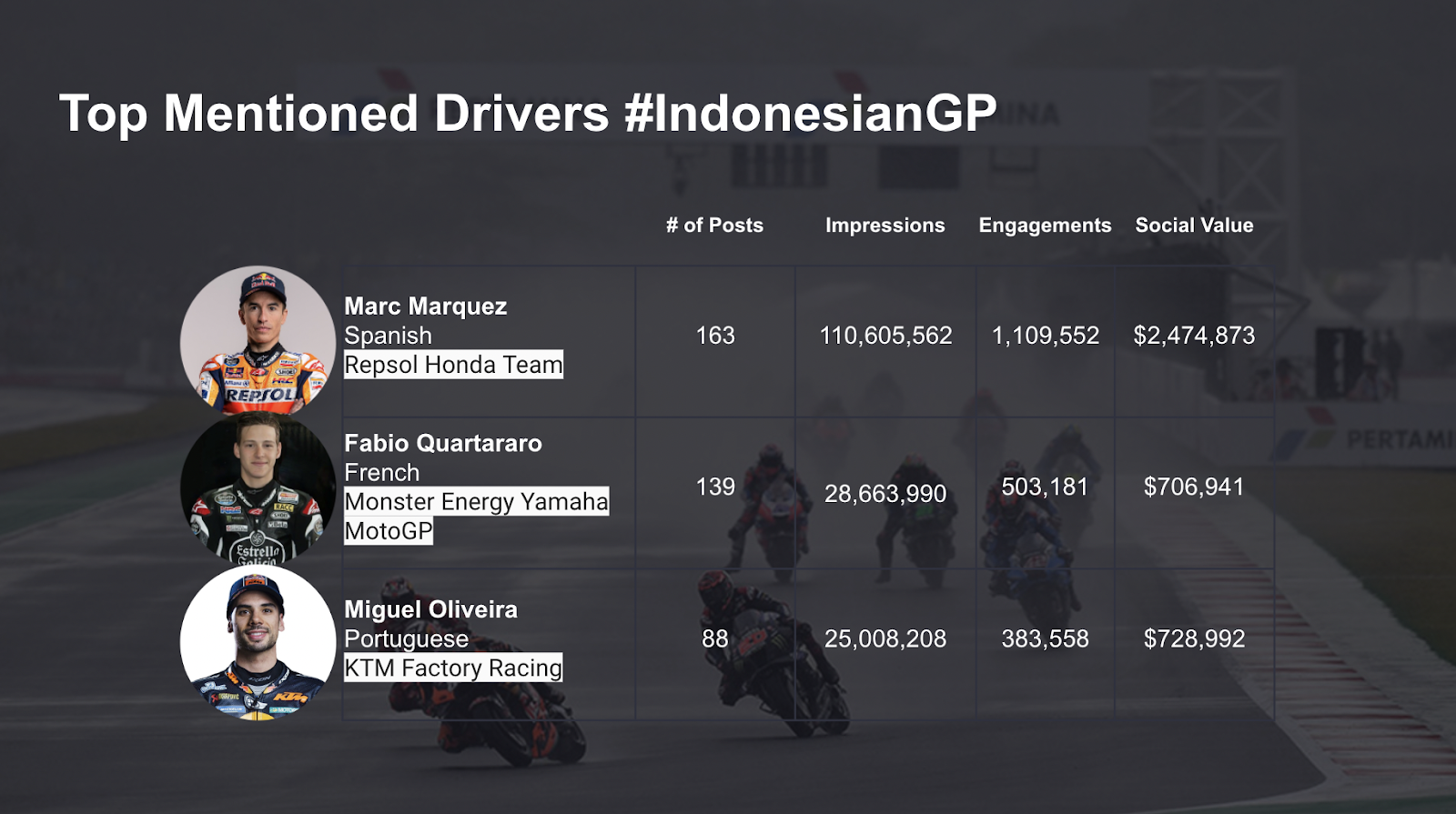 As far as teams go, LCR Team had the most mentions. but posts mentioning Team Suzuki Ecstar ended up with the highest impressions. The top-performing teams were actually not the most mentioned, showing the power of dedicated fanbases, win or lose. With a huge population and digital audience, as well as the hype of hosting the Grand Prix after 25 years, Indonesia was unsurprisingly the top location for the conversation around this event on Twitter. A massive 91.7% of the Twitter audience came from Indonesia. The Indonesia audience was followed by Spain, Marc Marquez’s home, and Malaysia. Noteworthy for potential partners, Gaming, Automotive and Sports were the audiences top general interests.

Monitoring an event like the Indonesian Grand Prix helps gauge the interest and response of fans. In this case, the large social numbers suggest MotoGP’s return to Indonesia was quite the success.